North House Folk School (where I teach classes) celebrated 20 years in 2017 with events that included an exhibition, “Begin/Continue” in Grand Marais, Minnesota.

I was inspired to create this piece for the exhibition in celebration of North House and it’s founder, Mark Hansen, whom I met in a row boat several years ago in the bay on Lake Superior.  His infectious enthusiasm for life, learning, nature, and sharing all the above with the people around him gave me plenty of creative ideas for this automaton.  I also wanted to celebrate the many classes North House offers and the way it contributes to the community.

Thank you to North House School, Staff and Community, and of course, Mark Hansen.

Mark Hansen Loves to RowMark Hansen is the founder of North House Folk School and first taught boat building there. The first time I met him was in a row boat on Lake Superior (as he rowed).

Close up of Mark and the ChipmunkThe boat is modeled after the pram, a row boat that is built in classes at North House and also sits along the shoreline for use and pleasure.

Caricature of Mark HansenI carved this caricature based on a photo supplied by North House. The smile is typical Mark, but when I finished the piece I found he had shaved much of his facial hair and now looked like a quaker. OH NO!

Mark Close-UpI made a miniature Norwegian Work shirt for him to wear as a nod to a class taught at North House. I wasn't able to find something suitable to use for buttons, but maybe I still find something. Who knows?

Chipmunk inside a Black Ash BasketChipmunk pops out of a Black Ash pack basket with a piece of pizza which is a nod to the community pizza bakes at North House Folk School.

Gull FishingThe Gulls are abundant at North House Folk School which is located on the shore of Lake Superior just one dock away from where commercial fisherman leave and return with their catch every morning to the mournful cries of dozens of hungry gulls. The shoe? Yes, there is shoe making at North House, but also concerning is the garbage that accumulates in Lake Superior.

Gears Close-UpThe framework is made of White Oak and finished with a dark blue/red wax finish. I wanted it to have an underwater feel but still be able to see all the gear works. I used joiner similar to Timber Framing techniques taught at North House. 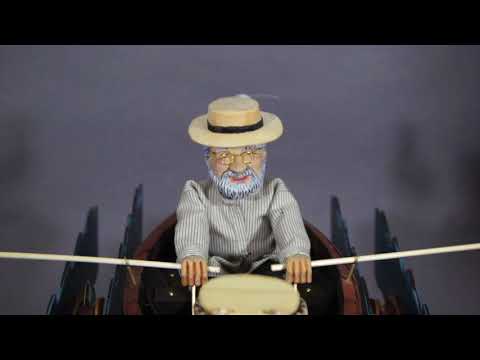