The interactive sculpture Night and Day in the North Woods was installed in the Children’s Hospital’s Palliative Clinic on September 28. The cabinet holds a diorama of a northern woods scene with a waterfall.

The sun and the moon rotate on the same wheel marking day and night, an owl sleeps in the day and comes to life at night while a bear disappears at night and reappears at the stream during the daytime. The waterfall and fish are on their own crank and can run at all times of the day or night.

The following are the concept drawings with finished photos and additional photos of the creative process.

Daytime in the North Woods

This concept drawing shows the nighttime scene in the North Woods.

Nighttime in the North Woods

Waves of the waterfall undulate as a multiple cam rotates as the crank is turned.

Fitting the pieces together

Owl opens and closes his eyes.

Owl stretches his wings and sings

Bear Mechanism makes bear rise up and turn his head and then return to his hiding place.

Bear's mechanism gets a bit complicated.

Background gets a dark undercoat

Carved trees in the foreground

Brightening up the trees

Frames laid out for paint

Trying the frame on for size

Finishing touch in back corner

Gears are visible in back window.

Owl wakes up at night.

Owl flaps his wings and hoots.

Bear appears when the sun is out.

Night and Day in the North Woods has two cranks. One turns the waterfall and the fish, the other turns the sun and moon which activate the bear and the owl. 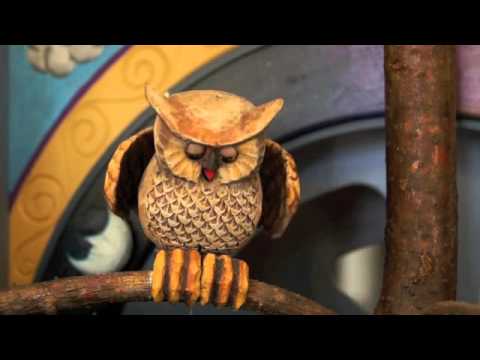